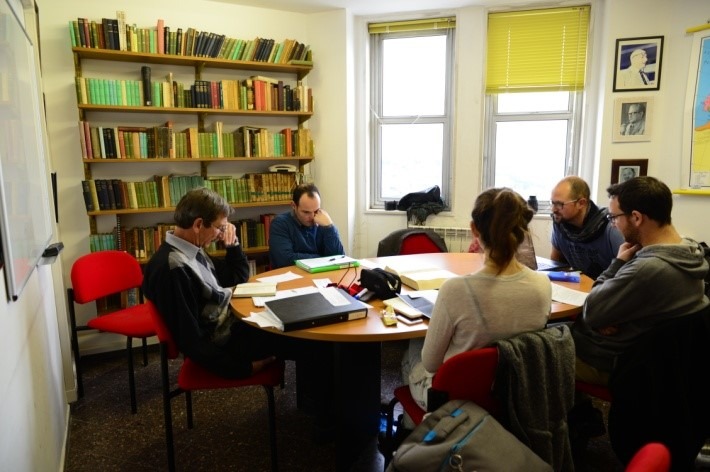 B.A. studies at the Classics Department provide an in-depth knowledge of the intellectual treasures of classical Antiquity in their literary, linguistic, historical and philosophical dimensions. Students approach the great books of the classical literary canon – Tragedy and Comedy, Poetry, Philosophical Texts, History and Oratory – in unmediated fashion, in their original languages. Department students are also exposed to non-literary sources, namely epigraphical, papyrological and archeological ones, and learn of areas of contact between Classical Greek and Roman culture and other, surrounding cultures, such as Hellenistic Judaism.

Elective B.A. courses focus on a range of texts from several genres. Students are exposed to a broad amalgam of areas of research, including Linguistics, Textual Criticism, the preservation and transmission of classical texts, Literature and Literary Criticism, History, History of the Theatre and of Visual Arts; Social Structures and Cultural Institutions; Religious Studies; the development of science and technology; Philosophy; Law and Political Thought.

During the course of their studies, BA. students are also exposed to a range of research approaches and scientific methodologies which prepare them for advanced-level research in Classics and related fields.

Studies in our department are carried out in small groups which offer an intensive and intimate learning experience involving personal guidance and mentoring of each student by department teachers.

As of 2016-17, B.A. studies at Hebrew University consist of two majors or one major and complementary studies. Classics B.A. students may choose between three tracks: a Greek-oriented track, a Roman-oriented one, and a more or less symmetrically balanced bi-lingual track. In all three tracks the students are trained in both Greek and Roman materials and sources, but the emphasis on the two cultures varies in the different tracks.

The first year of study is devoted to learning Greek and Latin, and to introductory courses aimed at establishing a basic familiarity with classical culture. During their second year students acquire a deeper knowledge of the languages, authors, and genres of classical literature, through a direct reading of works in the original language. All courses from the second year onwards require knowledge of Greek and/or Latin.

In the third year of studies students participate in seminars, are exposed to research in Classics, and learn to carry out independent research. The third year is also devoted to the completion of independent reading requirements (to be explained below). At the completion of their B.A. course work, students are required to take an integrative exam (details below). While studying for their degree, students are required to take two complementary courses from other departments (details below).

Complementary courses from other departments. In the course of their B.A. studies, students are required to attend two courses offered by other departments in the Humanities Faculty, courses which serve as introductions to various aspects of classical cuture. One of these courses should be a course offered by the History Department on the history of Greece or Rome.

The second course should be chosen, after consultation with the departmental advisor, from the following list:

Independent Reading: During the course of B.A. studies, students are required to complete a reading list which includes a range of core texts. This obligatory reading list enables students to reach the highest international standards of Classics students.

The reading list includes some works which are taught in the framework of courses. Students read the remaining texts independently during the second and third years of their B.A. studies and are given a brief oral exam on the texts.

Integrative Exam: Students are examined on a body of text in addition to relevant scholarly bibliographical items: the text is individually chosen by each student, and coordinated to his or her field of interest.

The department also organizes study trips to archeological sites from the classical period.

Modern Languages: The department recommends that students study a modern language, be it French, German or Italian.

Recommended Distribution of courses Towards the B.A. Degree

Course load: 12 to 14 weekly hours (6 to 7 classes a week per semester + completion of requirements from previous years).

It is highly recommended that third year students take more courses in the first semester, and plan blocks of course-free time in the second semester for non-course requirements.